Skip to content
Home›Detoxification›Caffeine and Adrenal Fatigue — Could Your Adrenal Glands Be Paying Dearly?

Caffeine and Adrenal Fatigue — Could Your Adrenal Glands Be Paying Dearly?

When I asked my patient, Katy, whether or not she drank coffee, she responded with laughter.

“You know how Lorelai on Gilmore Girls answers ‘only with my oxygen’? That’s me,” she said.

Katy’s story is like a lot of my patients’ stories. In a lot of ways, she’s actually pretty healthy. She eats a balanced, whole foods based diet. She works out every morning. She goes trail running on the weekends. She rarely drinks alcohol.

But Katy is also a busy woman. Her days are jam-packed, and even though she works healthy habits (like her workout) into them, she rarely takes the time to rest.

And, like so many other busy, successful women, she relies on coffee– a lot of coffee– to fuel her.

The thing is, coffee is not inherently unhealthy, the way sugar or processed foods are. A lot of studies have even found associations between coffee consumption and reduced risk of illness.

But if you’re experiencing adrenal fatigue, as Katy was– or if your caffeine consumption goes beyond a moderate intake– this energizing fuel might actually be draining you.

Let’s explore the connection between caffeine and adrenal fatigue, and how you can increase your energy levels with less caffeine.

What you need to know about caffeine and adrenal fatigue

It’s certainly a cultural norm in the US to use caffeine to get us going in the morning. Just look at all the t-shirts, mugs and memes out there that tout the essential role of caffeine in our lives.

Many of my patients say that their need for caffeine is priority one when they wake up; they even warn their families not to speak to them before they’ve had that first cup of coffee, tea, soda, or in a rather disturbing recent trend, energy drink of the day. So, I can understand the shocked reaction I see when I suggest avoiding caffeine.

But here’s the thing… I’m not actually suggesting that you shouldn’t have any caffeine. So, go ahead and breathe a sigh of relief! There are actually many health benefits of coffee and caffeine that have been backed by research.

As with most things, moderation is key.

But when coffee, or any other form of caffeine, is the only thing keeping you going, and you find yourself caught in a cycle of caffeine-induced ups and downs, it’s time to take a closer look.

Often, an adrenal imbalance that prevents restful sleep is hiding behind the caffeine crutch.

And if you can heal your adrenals and restore your healthy stress response, you can go back to just enjoying a cup or two of coffee or tea– without feeling like you won’t be able to function without one more.

Does caffeine cause adrenal fatigue?

Caffeine won’t cause adrenal dysfunction all by itself, but your body changes with excessive intake of caffeine, putting stress on the adrenal glands. And if you choose an energy drink or coffee over a good night’s sleep or eating right, your adrenal health will suffer.

Let’s examine the relationship between caffeine and adrenal fatigue and the impact of caffeine on your body.

The Connection Between Caffeine and Adrenal Fatigue

We all have a natural, physical response to stress. This “fight or flight” reaction is involuntary, and essential. It begins at the HPA (Hypothalamus-pituitary-adrenal) axis, and spurs the release of stress hormones – epinephrine (adrenaline), norepinephrine and cortisol – meant to jolt you into action when real danger is present.

But caffeine masquerades as an emergency, spurring your adrenals into action when there’s no need for these stress hormones. And 100-200 mg of caffeine is all it takes to set this response in motion (for reference, one 8 ounce cup of Starbucks drip coffee contains approximately 155 mg of caffeine).

Can you recall how you feel right after you drink an espresso? If you pay close attention, you’ll probably notice your heart begin to beat faster, your muscles contract, and you’ll feel the instant energy from the sugar and free fatty acids your liver has released into your bloodstream.

You may also notice feelings of anxiety or increased worry. Usually, when you’re having a caffeinated drink, there’s no actual emergency. But your body is ready to conquer a predator, even if you’re just sitting and enjoying social time with a friend.

That boost of energy works well when you need it – to react quickly while driving, for instance. The most critical function your adrenals have is to help you survive. But their secondary function, to provide balance in your hormones throughout your life, is important too – and even more so as you age.

The complicated relationship between caffeine and adrenal fatigue

Remember, I’m not saying you need to kick coffee to the curb. A cup or two per day probably won’t impact most women much, assuming they don’t have an unusual sensitivity to caffeine. But if you’re using caffeine to keep you going too often, or you’re drinking caffeinated beverages late in the day, you could be throwing your hormones out of whack.

And if this goes on too long, adrenal fatigue could be the result. So what is caffeine actually doing to your hormones?

Cortisol is integral to that flight or fight response we talked about, and impacts your ability to get restful sleep. It’s supposed to be high in the morning and lower at night. But caffeine changes the natural rhythm of cortisol, sometimes turning the cycle upside down.

Additionally, when your cortisol is high too often, your body is in a constant hyper-alert state, which leaves you feeling exhausted. Often, when women feel exhausted, they turn to caffeine to help. It becomes a continuous loop – fatigue-coffee-energy-crash. You just can’t regain the energy you are seeking, no matter how much caffeine you consume.

To compound the issue, your adrenal glands aren’t just responsible for stress hormones; another critical job is to maintain appropriate levels of sex hormones. But when they’re constantly called upon for more cortisol, whether due to actual stress or caffeine-simulated stress, they just can’t keep up. In this way, caffeine may also be impacting your hormonal health. If you happen to have insulin resistance, the relationship is even more complicated. Increased cortisol levels stimulate the release of glucose into your bloodstream, which in turn prompts the pancreas to boost insulin production that helps the glucose enter your cells and give you the increased energy needed to respond to the “threat.” The problem for women who already have insulin resistant cells is that, as studies have shown, caffeine exaggerates those responses. So, the caffeine you had in the morning can impact your insulin levels in a way that makes your blood sugar drop in the mid-afternoon. The fuzzy thinking and fatigue that result prompts you to reach for another cup of coffee to keep you going, and the cycle continues.

There are so many factors that change the effect that caffeine has on insulin sensitivity – gender; how healthy your body is; whether you’re eating or consuming caffeine on an empty stomach; and having caffeine, carbs and sugar (like a cup of coffee and a cinnamon bun) all at once.

To further confuse things, the caffeine source seems to make a difference, too. For instance, research shows that tea seems to help reduce blood glucose. But even though there are plenty of questions, it’s clear that caffeine affects both insulin resistance and adrenal imbalance. Since it’s common for women to have both, and the two together complicate matters further, the caffeine connection is important to pay attention to when working to heal each. How to get out of the adrenal fatigue & caffeine cycle

I know that it seems nearly impossible for some women to quit caffeine. Some women fall apart completely at the thought of giving it up for even a day or two for testing purposes.

Caffeine is addictive, and not just in physical ways. Our culture places great social importance on bonding over coffee or tea. And, the more exhausted you really are (regardless of the reason), the harder it may seem to make a change like this.

So, giving it up all at once might not be the best plan. The idea is to reduce stress, not exacerbate it!

But I strongly recommend taking a step back – maybe say no to a third or fourth cup, and find healthy replacements like herbal tea and water. Adrenal healing is a long, slow process and you have to approach it in a way that works for you.

Remember, also, that I’m not saying you must go without caffeine forever.

When you are healing, taking a break from certain food and drink is helpful in figuring out the roots of your symptoms.

Nor am I suggesting you have to quit cold turkey. In fact, weaning yourself off caffeine slowly is important – otherwise, you’ll feel even more lousy, and quit before the healing process has really begun.

Try cutting out one cup of coffee (or whatever caffeinated beverage has a hold on you) per day for a week at a time. For instance, if you typically drink five cups of coffee each day, start by having four the first week, then three the second week, until you’re down to one a day. This won’t feel too extreme, and can help you avoid headaches and other uncomfortable symptoms.

Meanwhile, work on healing your adrenal fatigue with the help of diet, herbal supplements, mindfulness practices, and more. You can learn all about an effective functional medicine approach to healing adrenal fatigue here.

Your pick-me-up could be slowing you down

If you want to sustain healing long term, you’ll also need to examine your overall lifestyle habits, nutrition, and how you handle stress. This is much easier to do when you’re feeling great! And if you understand the impact of caffeine on your health, you’ll be far better equipped to define your relationship with caffeine on your own terms, instead of letting it define you! 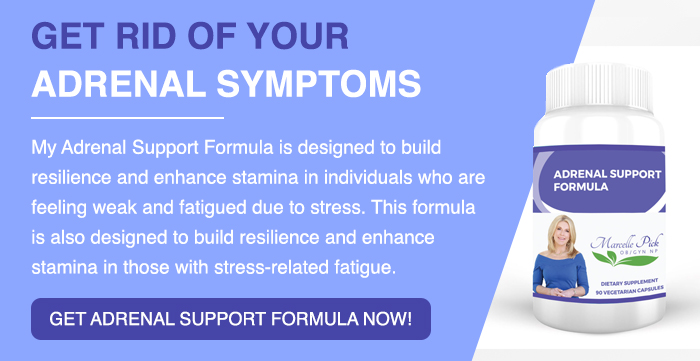