Skip to content
Home›Menopause and Perimenopause›What Happens After Menopause? A Look at Concerns and Celebrations Postmenopause

What Happens After Menopause? A Look at Concerns and Celebrations Postmenopause

Women come to my office all the time afraid they are entering menopause. The women in their early 40s are even more fearful that they’re heading toward the transition. They are mortified that the BIG CHANGE is creeping up on them far earlier than they anticipated. But more often that not, they are afraid of what comes next— what happens after menopause. So many woman today are caught up in worrying about postmenopause. These women aren’t even aware that this stage of life can bring amazing changes and incredible freedom to their lives.

The years after menopause can stretch out like a road without an end. A woman’s average life expectancy is so much longer than it used to be. Sometimes women fear these years will stretch out endlessly with nothing to look forward to. But nothing could be further from the truth and I’ll explain how this is possible.

I have helped so many women navigate menopause and come out the other side feeling better than they ever have. But what makes them that way? Let’s take a deeper look at what happens after menopause and when you are considered postmenopausal.

When is a Woman Considered Postmenopausal?

It can be tricky to know just what point in the transition you are at. After all, you won’t know you are through menopause until you’ve gone twelve consecutive months without any vaginal bleeding. Many women who thought (or hoped) that they were finished with periods have to come to me looking for answers. I’ve seen women even going several months with no bleeding whatsoever, only to have them begin again. This is called postmenopausal bleeding, and when that happens, you have to start counting back at one.

But the issue isn’t quite as simple as counting. Circumstances, like having your ovaries surgically removed, can make you postmenopausal because there’s no possibility that you’ll have another period. But a woman whose periods stop during chemotherapy isn’t considered to be postmenopausal because after treatment stops, her periods could begin again even if it’s been more than a year. And any kind of hormone replacement therapy (HRT) can muddy the waters because when therapy is stopped, symptoms could return.

Just as with all phases of life, how a woman experiences the years after this fundamental transition will vary widely. Lifestyle choices will play a large role in the quality of life a woman has, particularly in regards to emotional and physical health.

Menopause is a perfect time to sort out lingering issues from the past, start new healthy habits, and prepare for the life you’ve always wanted to lead. It’s like going through puberty, but this time you have the advantage of a fully developed brain and the wisdom born out of many years of life experience. You truly can make the time after menopause the best years of your life. But you’ll have to do some work to be sure that uncomfortable symptoms and old-fashioned ideas don’t slow you down. Your health care practitioner is an essential partner as you move through menopause and into this amazing new phase.

What Happens After Menopause Top Concerns

There are a lot of misconceptions about what happens after menopause and what life will be like for women. Women fear menopause, and all the years after, because they feel as though their best years are behind them. Where does this notion come from? Often, it’s the cultural messages women are given. Just look at TV shows and movies – how are older women portrayed? The show “The Golden Girls” helped push aside the notion that life ends after menopause, but that show was an exception, not the rule. Perceptions are shifting, but not quickly enough! Let’s dispel some of these old ideas, then I’ll tell you all the things to celebrate about life after menopause.

“It’s all downhill from here”

Once a woman passes through menopause, it can feel like there’s nothing left to look forward to. Other natural transitions, like puberty and childbirth, have a clear ending and another stage to move towards. After menopause, women often fear that the only new stage on the horizon is failing health. But nothing could be farther from the truth. With the average age for menopause around 52, and the average life expectancy of women in the US around 81, that’s approximately 30 years to enjoy. There are so many things a woman can do to maintain good health after menopause. Eating well, getting appropriate exercise, and taking supplements to maintain hormonal balance will help support you in your later years. Keeping yourself feeling good will allow you to enjoy the freedom so many women feel after menopause, truly making these your “prime years”.

There are many uncomfortable symptoms associated with menopause, and some women feel like they’ll never get past them. Indeed, for some women these symptoms can linger for much longer than necessary. For generations, women didn’t talk about menopause— in the autobiographies of many famous women that I’ve read, it’s not ever mentioned. No wonder women are concerned that the hot flashes, headaches and fatigue will never end. But menopause is not a disease, regardless of how many medical professionals still treat it as such. These symptoms are a message the body is sending – and when you stop and pay attention to that communication, there is so much that can be done about it! 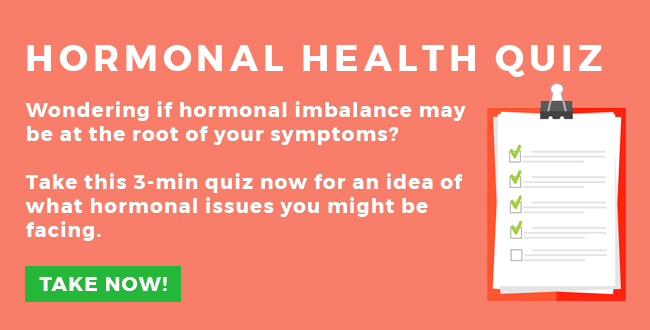 “My sex life is over”

So many women have received the message that getting older isn’t sexy. They’ve heard that their vagina will change, and their sex drive will disappear. And yes, these things may happen for some women, but none of these issues are irreversible. It’s inevitable that your body will change with time, but what people don’t tell you is that women often find themselves being far less concerned about what others think. That makes it a perfect time to seek treatment for symptoms like vaginal dryness or low libido, then take steps to spice things up in the bedroom. My article on safe and enjoyable sex in the middle years can get you started.

“These feelings of despair will never fade”

The path through perimenopause and menopause can be a highly emotional journey. Some women are grieving the end of their childbearing years or processing the difficult reality that they will never bear a child of their own. Women who resist the intense emotions that crop up, refusing to examine them closely, might find themselves stuck in a deep sea of sadness. But you don’t have to stay stuck there. Seeking help from a professional therapist or trying a program like emotional freedom techniques or the Hoffman Process can help a great deal. Finding ways to move through the emotional side of perimenopause can set you up to feel your absolute emotional best postmenopause.

Celebrating What Happens After Menopause

I hope I’ve eased your mind about some of the concerns women have about what happens after menopause. In my practice, I’ve helped so many women discover how much there is to rejoice about when they reach postmenopause, and I want to help you too. Let’s look at all the things that are great about these years.

So many women tell me that gain a different understanding of the world as they move through menopause. They begin to realize that the saying “what other people think about me is none of my business” really is true – other people’s opinions matter far less than how they feel about themselves. Women are digging deep and come out the other side with inner wisdom that isn’t possible without all the life experience. Menopause is like a second adolescence, a time of intense growth and discovering what truly matters. I encourage women to try new things and discover passions they may not have had time to pursue in the past. I discovered ballroom dance and have the confidence to train hard and compete in front of large crowds – something I never would have done in my younger years!

In this phase of life, women are learning that it’s time to speak up about what is important to them. They won’t settle for the status quo. Though it may take time to let go of guilt or fear around speaking up, women are realizing that they deserve to be heard.

From the time a girl goes through puberty and begins menses she has to gain awareness for herself. She has to consider the possibility of pregnancy every time she engages in sexual intercourse. What happens after menopause is that – for the first time – pregnancy is no longer a concern. At this point in their lives, women have more time – children are grown, they’ve reduced outside commitments and are ready to focus on their own needs. They’ve made peace with their bodies and have the confidence to try new things. Many women find that sexual activity is more exciting and satisfying than it’s ever been! With the right information and support, it’s definitely possible.

Perimenopause and menopause can be a time of great hormonal fluctuation, which creates those symptoms you always hear about. Postmenopause is the light at the end of the tunnel for many women: no more hot flashes or heavy bleeding; no more intense mood swings! Of course, these hormones can be stabilized while going through the transition, but when your body has completed the change, this happens more naturally. And when you’ve built great lifestyle habits along the way, such as exercising, it’s much easier to keep these hormones stable for the long haul.

Living the Best Years of Your Life After Menopause

I want to soothe – not dismiss – the fears and concerns women have around what happens after menopause. I want to reassure women that this is their time – to rediscover or reinvent themselves into exactly who they want to be. There are solutions to the issues that women are worried about. And when they begin to feel better, they can truly find out who they are inside.

I’ve had patients who have done amazing things – things they never would have considered when their kids were young or they were climbing a professional ladder. Let me tell you about two patients I had.

The first was an accountant at a large university. After menopause, she realized she’d had enough. She resigned her position, and opened a knitting cafe that also sells organic coffee and tea. Of course, this took careful planning, meditation, and discussion with family and friends. But this is just one example that shows how endless the possibilities are.

Another patient nearing her 60th birthday decided she was tired of waiting to pursue a deep spiritual quest. She packed up her house, and spent a year-long trek through Europe with her husband, exploring her ancestral heritage.

Those are just two examples of what women can do when they embrace what happens after menopause and the freedom being postmenopausal can bring. It’s time to realize that these really are your prime years. Now go out and live them!